The Boss Cadillac Escalade car service is one of the most popular vehicles on the market due to its practicality, comfort, luxury, and bold looks its not only The SUV it calls as the fathers of all premium SUVS. Toronto car service is the Only proud transportation owners in the state of Ontario Toronto GTA that provides the availability for such luxurious vehicles in Bulk and quantity. Whether you are in Toronto for corporate executive travel or visiting your favorite sports game or business meeting or in for vacation, our chauffeured team will get you there with luxury & style with this classic late model Cadillac Escalade platinum.

Escalade ESV version boasts a luxurious cabin contains up to comfortably  7 adults, and still boasts an additional 45.8 cubic feet of interior space. As in addition to tremendous room the stunning interior offers standard features like Bose™ 5.1 Surround Sound and a Rear Vision Camera. The boss Escalade ESV delivers plenty of space for you to ride with room to spare for up to 5 luggage in rear.

Cadillac Escalade ESV is a full-size luxury SUV engineered and manufactured by Cadillac US. It was Cadillac’s first major entry into the new demanding SUV market. The Escalade was produced for the 1999 model year in response to German and Japanese competitors and to Ford’s 1998 release of the Lincoln’s Navigator SUV. The Escalade Cadillac project went into production only ten months after it was approved. The Escalade ESV is built in Arlington, Texas. The name of Escalade refers to siege warfare tactic of scaling defensive walls or ramparts with the aid of ladders or siege towers. As of 2015, the Cadillac Escalade is available in every where that Cadillac is available in, except Israel. Cadillac Escalade ESV version is available in the United States, Canada, Mexico, and the Middle East and famous as of its introduced extra room. It is Cadillac’s largest luxury oriented passenger and load carrying SUV which was previously served by the Cadillac Commercial Chassis.
With new look and features such as bird eye view and 360 Cameras around now even any simple driving skilled person can drive this giant. More secured than ever so its been loved by Toronto car services corporate clients. Starting price with $150 per hour for three hours of executive service, its in high demand to impress and taste the newest electronic magnetic ride suspension is something to be tried. Toronto car service is the brand ambassador of Cadillac Escalade car service, only one to produce more Escalades on road then our competitors in Toronto. 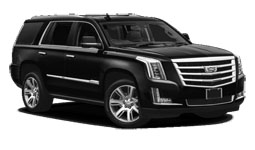 Click one of our contacts below to chat on WhatsApp